James Pogue makes things uncomfortable, but the right kind of uncomfortable. We discuss the details and nuances of diversity and inclusion and how to build cultures within restaurant brands. 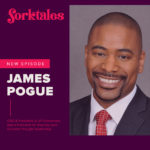 Mr. Pogue warned me of his drive to have uncomfortable conversations about race, diversity and inclusion. It’s the right kind of uncomfortable though. One that challenges one’s own thoughts and ideas. A conversation that pulls no punches and gets it all out on the table.

James has a wealth of knowledge, insight, and passion for diversity and inclusion in the restaurant industry. In this episode, we unpack it all to dig deep into this ever-evolving topic and endeavor.

Overcoming the fear and apprehension of introducing/discussing diversity, esp. from leadership.

“Colorblindness” vs. “Hyper aware of color” and “Equality” vs “Equity”

Cancel Culture – an openness to conversations and apologies.

Breaking down the tunnel vision of people who can’t empathize/put themselves in other peoples’ shoes.

Bringing your whole self/identity to the table—beating up ideas with those different lenses.

Be the right kind of uncomfortable—that’s where the growth happens. Apply that to diversity.

“There’s a significant difference between the ‘want to’ and the execution.”

“We need to start to do some new things to get us to a new point of realization and understanding.”

“I don’t see diversity as necessarily a movement or a topic; it’s a consideration that I think is important for the growth and sustainability of organizations and humanity, you know, across the globe.”

“If we have not practiced having tough conversations around diversity inclusion advice, how can you therefore expect to be good at them? We are exactly where we are supposed to be given the amount of effort and practice and intention that we put into [it].”

“I think oftentimes we start thinking about what we are going to do next without recognizing where we have been.”

“One of the things that has happened is that we have begun to ignore the idea that diversity includes our white guy friends [and] colleagues…we have to respect what people bring to the table and to exclude that is to exclude a rich part of your history and how it has influenced your leadership.”

“The ideas that are generated by the [diverse Vigor] group are wealthier [than if we were a bunch of white bearded dudes.]”

“I’ve asked leaders this question: ‘Do you think that women bring something to the table strictly because they’re women?’ In a 99% clip the answer is yes, simply because they navigate the world as a woman they see things differently than their male counterparts… why is there a pause when it’s a Hispanic man?”

“I think it is important to put the lens on the individual. We spend a lot of time trying to critique the person across the screen or across the table, when the person we need to spend the most time with is in the mirror.”

“There are times when it’s important to be selfish, and if you’re trying to grow your organization and shift your leadership, this is one of those times.”

“I’m driving this to the people that are listening here now. You have to decide what you’re going to do…if that child looked like you, would you feel differently? Would you be behaving differently, regardless as to how they came [to America].” (in ref. of children in detention camps)

“[We define diversity and inclusion for ourselves and our organizations] and then you and I go to a separate table say, ‘This is what we’ve been doing, what have you been doing? How’s it been working for you?’ and then let’s beat up your idea, not you, and then let’s do the same for mine, and let’s come up with a better solution.”

“You need to be the person that I see pushing against the ocean all by yourself, that’s how you get people to join you.”

“We get sharper by understanding the other person’s argument, and if necessary, to be able to articulate it in their absence with the same kind of passion that they would bring to the table. We’ve been socialized, and raised, and educated to believe that that there is one way to be, and that is to stand in your corner and yell from it at them, as opposed to saying, ‘Hey, how about we grab a sandwich and some iced tea, and let’s talk about what your situation is—help me understand it.”

“Bring to the table in the diversity space the same level of rigor and KPI’s that you would anywhere else, and when you do that you will begin to see the results. [In other spaces], we make sure that people know what they’re doing, relative to their organization.”

“You wouldn’t hire a Chief Technology Officer that shifted over from marketing after two, or three years and say, ‘Just lead this for us.’ You go get somebody who’s been doing this for a while and has shown some significant success. That’s one of the many things that I advise clients to do moving forward: to take a look at this [diversity and inclusion] in your organization and treat it with a certain level of rigor.”

Leaders can support the concept of diversity by starting out with flat definitions within the company, i.e. personalize it for the organization: How are you driving this to your organization?

Adding 3 zeroes vs subtracting 3 zeroes (from your family’s income growing up) – how would your options change?

What would we tell our children to do? We should do our version of that.

Have some tales to dish?
Reach out to Be a Guest on the show
Contact Us

Forktales is a project by the team at Vigor.

Signup to get notified when we launch and when new episodes are available.